Our experience with raising dogs extends over     45 years.  During the majority of those years, a lot of emphasis was placed on studying pedigrees,  bloodlines and genetic traits.

It all started in childhood, while growing up on a small horse farm in  Ada, Michigan, also home to Egypt Valley Great Danes. The foundation Sire was “Pathon”  an American, Canadian and International Champion.  Our jobs as kids was helping with the show dogs, while at the same time learning about pedigrees.  There were times I was involved with more critical care, such as tube feeding and resuscitation.  I was fascinated as a child to work alongside Dr Weisner our small animal Veterinarian, whom occasionally came on farm calls.  There was also the unpleasant downside of  learning about animal death.  Great Danes were notorious for getting bloat which is inherent in that breed.  Now a days they tack the stomach in place to keep it from rolling, which helps with less dying from bloat.  This is NOT common in the pwd breed, and more information about this can be found here. 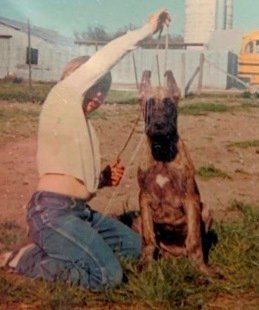 Experience with Danes  during childhood in mid – late 60’s.

Our next experiences was the Boxer Breed

Although raising and breeding horses (mostly during my young adult years) has nothing to do with dogs, it is the studying of pedigrees and genetic traits of  blood lines that are similar when considering breeding dogs.  Even though we have more tools available today such as DNA genetic testing, it is still important to study the pedigrees and conformation, in addition.

In my mid-thirties we turned back to showing and breeding dogs.  We started with the boxer breed.  Our first boxer was Ariel purchased from a friend whom was a breeder.   Then later after researching pedigrees and interviewing different studs we purchased our sire.  We continued with this breed until the daughter reached her high school years and the focus was more on her moving forward with her music and marching band.

Noteworthy of mentioning is we have fostered many rescue dogs and cats over the years, as well.

After the daughter packed up to move out west and taking our rescue dog with her is when we started researching Portuguese water dog  breed.  What specifically led us to the Portuguese Water dog breed were many things.

They have similar personalities to that of our boxers.  We found the disciplines needed while working in  dressage (our previous horse work) are very similar to that of the Portuguese water dog trials. Both start out at novice levels and work through many levels striving to reach the top.  The top level for dressage is Grand Prix  while Master is for the Portuguese Water Dog.    We absolutely love this breed and our dogs and could not ever see us without one now.